Architecture and Urban Planning in the age of Artificial Intelligence in an article by Rron Beqiri.

Much like in the 2001 film by Steven Spielberg, Artificial Intelligence has been having a tough time trying to earn our love and trust. Many of the rather smarter people alive today, the likes of Stephen Hawking, Bill Gates and Elon Musk, have been continuously warning us about the possible mayhem and destruction that will eventually happen due to A.I. robots taking over the world. However, before we reach what seems to be our inevitable doom, there’s bound to be a friendly period of A.I. helping our society.

But what is Artificial Intelligence? How can we understand it and can we use it to benefit us?

Simply put, A.I. (short for Artificial Intelligence) is the intelligence displayed by machines and software. However, like with many simple things, things aren't that simple. For a computer or machine to truly be ‘intelligent’, access to all the information in the world is not enough. It still needs to be adaptive, self-learning and intuitive. To distinguish artificial intelligence in a machine, in 1950 the mathematician Alan Turing came up with what he humbly named the Turing Test.
The essence of the Turing Test revolves around whether a computer can successfully impersonate a human. The test is to be put into practice under a set of detailed conditions which rely on human judges being connected with test subjects (a computer and a person) solely via an instant messaging system or its equivalent. That is, the only information which will pass between the parties is text.
In 2014 the chatterbot Eugene Goostman managed to convince 33% of the judges that it was human posing as a 13-year-old Ukrainian boy, justifying its grammatical errors and lack of general knowledge., thus successfully beating the Turing Test. This however does not mean that Eugene is intelligent in the whole sense of the word, it’s just a rather smart and massive heap of algorithms figuring out each answer individually.

Figure 1     What's required for a machine to be intelligent

Digital technology and A.I. is growing at an exponential rate. As "Moore's law" explains, over the history of computing hardware, the number of transistors in a dense integrated circuit has doubled approximately every two years. This means that in the future, a computer can design a better one that can design a better one and so on.
Today, A.I. is all around us. If you own a smartphone, tablet, pc or even a car, it’s very likely that it runs some form of A.I. (Siri, Cortana, Google Now, etc.). There are also projects by IBM and Google that produce supercomputers capable of beating humans basically at any game. Watson by IBM beat humans at Jeopardy, Deep Blue, another supercomputer by IBM beat Garry Kasparov at chess and lately DeepMind by Google beat Lee Se-dol at what’s known as the most complex game ever invented, the Chinese board game Go.
At this point all the A.I. in the world is what’s called ANI (Artificial Narrow Intelligence), or as it’s sometimes known, Weak A.I. This means that it can handle a chess game or complex algorithms, but is not capable of making intuitive decisions or learn as it ages, it’s not even nearly as smart as humans.

A.I. is already quite present and is used very often by architects for their projects, be that using something as boring as a calculator or as fun as BIM software. A perfect example of using A.I. to solve problems that would take days for an architect, is the space syntax software ‘depthmapX’ by The Bartlett at UCI. It uses A.I. to analyse the spatial network on many levels without the need of going on site.

A big trend nowadays is to use game engines, the ones that game developers use, for architectural purposes. Since these engines all have some form of A.I. that shoots back at you whenever you play a game, we can use them to do all the hard work for us. A good example would be Unity 3D, on which we can upload our projects, and use it’s A.I. to figure out for example the shortest distances to the fire exits.
As architects are learning to code, software designed especially for architect’s needs are being designed. There are many programs now that can provide the best layout of spaces according to our demands and what we data we input, this means that complex buildings can be instantly organized by A.I., with architects only adding some of the finishing touches.
Last but not least, A.I. has made it possible for architects to simulate the environment. With software like EcoDesigner Star by Graphisoft, or many open-source plugins for SketchUp we can do all the necessary building and environmental analysis, without ever having to leave our computers. 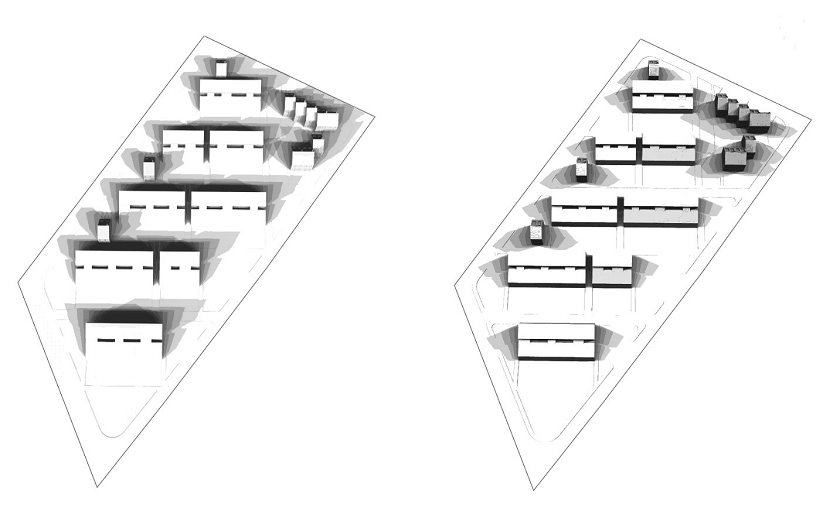 Information gained from citizens’ devices will be analysed by AI to automatically generate plans.
The ever growing connection of people via technology, is enabling a more open and transparent look into every person’s life. By knowing what we like, post online, buy or where we go, our smartphones, tablets and computers, through complex algorithms know us emphatically better than we do ourselves. This information is mainly used by companies to better market their products at us, but it can also be used to benefit humanity.
Access to people’s information combined with an A.I. tool, could present great possibilities to architects. By already knowing everything about us, our hobbies, likes, dislikes, activities, friends, our yearly income, etc., A.I. software can calculate population growth, prioritize projects, categorize streets according to usage and so on, and thus predict a virtual future and automatically draft urban plans that best represent and suit everyone. It will be the purest form of direct democracy, where politics and corruption have no access and where citizens are constantly uploading unaltered and uncensored information.
Simply put, the data that is constantly being uploaded by citizens via their devices is uploaded onto a cloud. Afterwards it is sorted and analysed by A.I., thus drafting a rough plan. This plan can then be improved upon by architects and planners, the result of which would be a completely finished plan.

A simple example of how this not-to-distant reality could work, could be taken from Tesla Motor’s Autopilot software. Every Tesla Car around the world is constantly uploading information about the roads they are driving on. This information is gathered in a cloud and then uploaded into other Tesla’s for future reference. This allows for all Tesla cars to be up to date with all the conditions of the roads and the manoeuvres they should make. This same information on Tesla’s cloud could be used by A.I. and architects to know the number of cars that pass through each road, prioritize the repairing, widening and changing of roads.
However, quite often in architecture and urban planning, the most logical solution is not always the best, or at least people don’t like it the best. This could present a problem in the early stages of A.I.’ development as it won’t understand why people are too lazy to walk, or why they insist on being private in public places. Nonetheless all of this will be resolved as A.I. evolves reaching what author and inventor Ray Kurzweil calls a Singularity.
The future of A.I. in architecture and urban planning promises a lot, but as we’ve seen, it’s very naïve of us to try and predict what it will be like. Sufficed to say, we can use AI in many aspects and fields, and it’s only a matter of time until it becomes the one and only way. Or, as Elon Musk writes: “Hope we're not just the biological boot loader for digital superintelligence” – in which case, we’re all doomed.