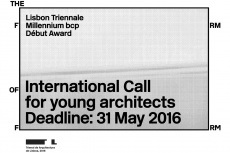 The Lisbon Architecture Triennale will distinguish in its 4th edition, The Form of Form, a young architect or architecture studio, in the second edition of the Début Award with the Lisbon Triennale Millennium bcp Début Award for emerging architects. This distinction awards recognizes outstanding work, critical ideas, and encourages career of applicants with a monetary prize of 5000€.

Applications are open until 15 June 2016. The winner will be announced during the opening week of Lisbon Architecture Triennale (5-9 October 2016) and will be invited to give partake in a conference in the closing week of The Form of Form (7-11 December 2016).

The Début Award was first awarded in 2013 to Bureau Spectacular of Jimenez Lai from Chicago and had a noteworthy participation of more than 180 applications from all over the world.