At the Matchmaking Conference 2017 at the Museum of Architecture and Design (MAO) in Ljubljana, 25 Future Architecture participants presented their concepts, ideas and dilemmas related to contemporary challenges in architecture, together with philosopher Slavoj Žižek, while the conference also saw the launch of its publishing platform archifutures.org. 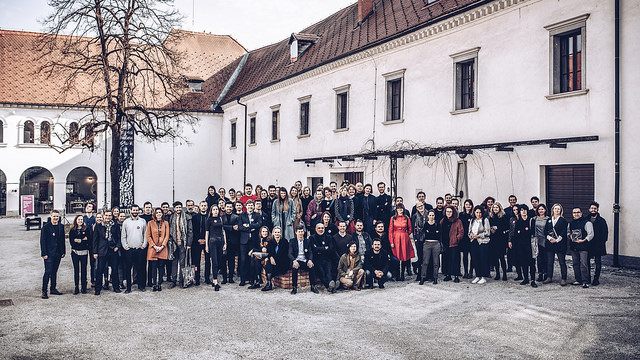 Matchmaking Conference 2017 DAY 1 and DAY 2 in images by Peter Giodani.

The conference was opened by platform leader Matevž Čelik, who stated that the "Future Architecture platform is proving solid ground for ideas that spark political critique in architecture anew. These ideas, which participants shared through the platform, largely revolve around the discourse of equality, about ideas that compel us to face the problems and challenges in the world around us, and address the question of the 'Excluded and Included' and similar."

Audience represented by selected creatives, platform members, professionals from the field of architecture and urbanism and general public was greeted by Hughes Becquart, from Directorate-General for Education and Culture of the European Commission. He marked the beginning of the new cycle of platform's programme emphasising that architecture is first a cultural expression reflecting diversity of Europe’s culture that has a great value and meaning to citizens; one of the reasons why Creative Europe supports initiatives, striving to make architecture and urban planning more democratic.

The first session introduced some of last year's alumni, who have been selected again to work within the platform framework. Miloš Kosec (Slovenia/UK), Filipe Estrela & Sara Neves (Portugal), Guerilla Architects (UK) and Léopold Lambert (France) shared their experiences of participating in the platform’s inaugural year.

Continuing the afternoon was series Archifutures Vol. 1–3 that presents a new field guide to the future of architecture, which maps contemporary architectural practice and urban planning. The books are accompanied by a digital platform archifutures.org, a live repository of Future Architecture contributions and experiences, where the Archifutures books are now available for order. The publishing project, which merges the possibilities of critical editorial work, innovative printing, and active user intervention has been concepted by dpr-barcelona with contents curated and edited by &beyond. The online live repository also offers an opportunity to engage with some of the rapidly evolving media platforms in architecture and talk about new publishing models. And a discussion led by Silke Neumann of Bureau N offered a chance to exchange experiences of these models in architecture.

Along with the Archifutures program, Anna Ramos of the Mies van der Rohe Foundation presented the Contemporary European Architecture ATLAS, which presents the 2,881 works that have been nominated for the European Union Prize for Contemporary Architecture. Nick Axel of e-flux Architecture presented a new platform for communicating issues related to architecture and design.

The second day was opened by Slovenian philosopher Slavoj Žižek, who shook the more comfortable perspectives of the selected participants, and went on to note that architects and architecture are primary indicators and analysts of social problems and relations.

The two days in February allowed the audience to become acquainted with the new projects and research of creators who are only now assuming their positions in the larger architecture landscape.

Future Architecture will now launch the public architectural programme around Europe, starting in March in Berlin and winding up in October in Lisbon. The highlights of the platform's two-year programme will be presented at the Future Architecture Festival in MAO Ljubljana in September 2017.